Connoisseurs, not cork-sniffers. We play acoustic music, heavily rooted in the blues. We pay homage to the trailblazers by continuing to break new ground. We cover the classics of blues, rock and Americana, as well as our own originals flavored  by the classics.

The Screwtop Sommeliers are:

Born outside Chicago, Ned was raised by two professional musicians. 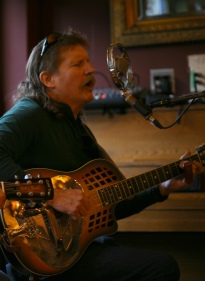 Music was everywhere in his life and he was always encouraged to improve, and never pushed towards  any specific genre. His family moved to New England where he was exposed to the fiddle tunes at local square dances. By age ten, he was focusing on slide guitar after hearing Duane Allman and Ry Cooder.  He played regionally until taking an extended hiatus. Now he’s back, stronger than ever, working with several performing and recording projects and with The Screwtop Sommeliers.

A Connecticut native, Toby began playing guitar at the age of nine, having

studied under Meriden, CT based jazz guitarist, Ron Stebbins. After hearing and improvising along to the double album, Bobby Bland and B. B. King Together Again…Live, his love for the blues and passion for simple soulful music has continually grown. Coming of age in the golden era of album rock, Toby’s appreciation of various guitar players is endless. The most influential on his playing were Eric Clapton and the Three Kings; B.B., Albert and Freddie.